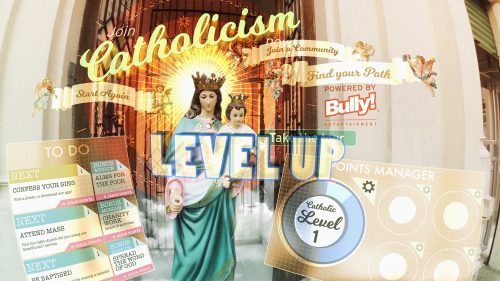 Hyper-Reality presents a provocative and kaleidoscopic new vision of the future, where physical and virtual realities have merged, and the city is saturated in media.

Keiichi Matsuda works as an independent design consultant, and runs a multidisciplinary design studio at the intersection of technology, media and architecture. The studio works on built installations, concept design, interaction and more, exploring how emerging technology will impact our future lives.

London designer Keiichi Matsuda has released a short movie depicting a futuristic scenario where digital media and the physical world have merged to create a kaleidoscopic “hyper reality”(+ movie).

The six-minute Hyper-Reality video explores Matsuda’s concept for a future where augmented reality has been carried to an extreme, with interactive virtual interfaces saturating the urban environment and identities controlled and expressed through digital platforms.

Matsuda said the film was intended to be provocative, and showed a “new vision of the future, where physical and virtual realities have merged, and the city is saturated in media”.

It features a central protagonist – 42-year-old Juliana Restrepo – who has become disillusioned with her life in Medellin, Colombia.

Her vision is filled with games, internet services like Google, and various other functions, alongside adverts that pop-up as she moves around the city.

These also give her the option to “reset” her digital identity, and accumulate points as she goes about her daily activities, while pop-up avatars act as personal advisors and a help line for the augmented reality system she is plugged into.

In the street, shops signs and traffic signals are again presented as a overlay over the real buildings and roads, and information and interaction indicators also appear over passersby.

“Our physical and virtual realities are becoming increasingly intertwined,” said Matsuda. “Technologies such as VR, augmented reality, wearables, and the internet of things are pointing to a world where technology will envelop every aspect of our lives.”

“It will be the glue between every interaction and experience, offering amazing possibilities, while also controlling the way we understand the world,” he said. “Hyper-Reality attempts to explore this exciting but dangerous trajectory.”

The movie is the first installment in a series of three conceptual videos created by Matsuda that offer visions for the future, which he has been working on for over three years and has funded via a Kickstarter campaign.

The second film, which was also shot in Colombia, will include footage filmed as part of Dezeen’s collaboration with car brand MINI, which culminated in an exhibition as part of the London Design Festival in 2014.

Augmented reality overlays computer imagery onto an individual’s view of the physical environment. Recent projects that incorporate the technology include a smart hardhat that gives construction workers information about their surroundings and a concept for a cycling helmet that could offer safer routes through cities.

In a 2014 interview, Matsuda told Dezeen that advances in digital technologies like Google street maps, and virtual and augmented reality, could eventually make possible a form of time travel.

“If you take [Google Street View] to its logical conclusion it means that everything is live video,” he said. “You’d have a live map of the world, essentially. If [the world] was all being recorded, you could stop time and you could rewind time as well.”

The Hyper-Reality movie begins with Restrepo travelling for her job – picking up and delivering groceries. As she journeys on the bus, she plays on a computer game that hovers in her vision, which is then replaced by the app that talks to her about her dissatisfaction with her job. A display to one side tracks her “job monkey” points – rewards that accrue as she works.

The movie quickly takes a dystopian turning as Restrepo’s unhappiness becomes clearer. A Google pop up in the palm of her hand attempts to answer questions including “who am I”, “where am I going” and “can I start again”?

In the supermarket, the virtual system starts to stutter and show glitches, presenting an alternate overlay world belonging to a man called Emilio, featuring guns and sexed-up representations of women.

Restrepo begins to panic about how safe her accrued points are, and is directed by the help avatar to follow a blue line and “reset” the system by sharing her biometric information at a service desk.

But in the street, she is attacked by a person whose identity is obscured by a fuzzy overlay and her virtual identity vanishes. She wanders across the street and find new virtual identity in front of an icon of Mary and Christ, with an overlay that invites her to join Catholicism.

Matsuda originally studied architecture, but became disillusioned with the industry. His London studio works at the intersection of design, architecture and technology, exploring the applications and implications of new media.

His previous projects include an installation inside the V&A museum, which visualised data streams from across London.