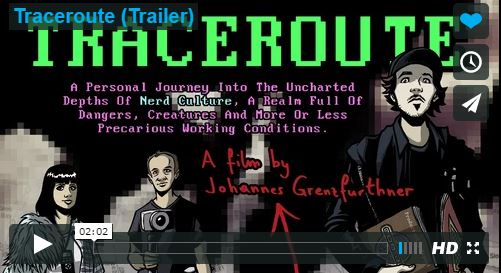 Movie about Nerd and Hacker Culture. Artist and life-long nerd Johannes Grenzfurthner is taking us on a personal road trip from the West Coast to the East Coast of the USA, to introduce us to places and people that shaped and inspired his art and politics. Traceroute wants to chase and question the ghosts of nerddom’s past, present and future. An exhilarating tour de farce into the guts of trauma, obsession and cognitive capitalism.

Praise for Traceroute:
“Traceroute is radical individual empiricism, a narrative biographical puzzle and an experimental projection matrix. Despite continual stimulus satiation, it is wonderful fun: the film tickles the synapses with a perfectly mixed cocktail of collectively shared context and quirkiness.” (Boing Boing)